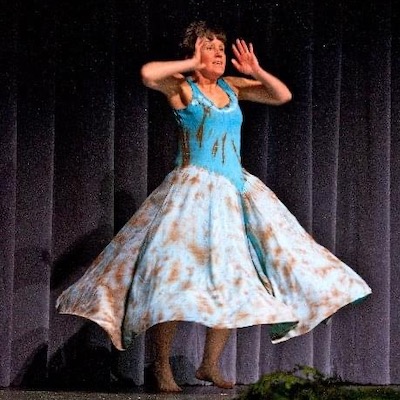 "Let the beauty we love be what we do."  Rumi

I was born in New York City and carry this greatest of cities in my spirit!  It was life in this city that awakened in me a deep love for the arts; especially dance, theater, and the visual arts.

I studied ballet and tap dancing as a child (and more recently)  and also studied with liturgical dancer, Carla De Sola choosing Liturgical Dance as my preferred form.  I have choreographed and performed hundreds of pieces and continue to use dance as a celebration of embodiment, activism and as a vehicle of praise and adoration of the Divine.

Beauty is one of my most cherished core values and am drawn by all things beautiful!   I seek to create beauty in all that I do as a way of uplifting this world.

Some other things about me ~

Teaching is my gift.

The dignity and joy of manual labor has always been a big part of my life.  I value physical work with the land and the honesty of living through the labor of my hands.

Regarding the Earth Community, my passion is for animals and protecting and safeguarding these beautiful beings.

My formal degrees are in Clinical Psychology and Christian Spirituality from Fordham University. Additional studies include dance, writing, biodynamic farming.

I was completely inspired by Thomas and asked to study with him, (which happened from 1983 until his passing in 2009), knowing  I would devote my entire life to what he called, The Eco-Zoic Era, an era of Wisdom.

In 1991,  I founded Homecomings: Center for Ecology and Contemplation which was a new ministry of my monastery.  Homecomings  was a vehicle for putting the teachings of Thomas Berry into action.

A few years later, in 1994,  I was one of the founding members of Sisters of Earth,  an informal support network of women who work for Earth healing and restoration.

In 1999 missioned by my Passionist sisters, and welcomed into the diocese of Vermont by the late Bishop Kenneth Angell, we began (Thomas Berry, Sr Rita Ordakowski, Bernadette Bostwick, and myself) Sisters of the Earth Community,  the first community of Catholic sisters founded specifically for the healing and protection of Earth and its life systems.

In 2004 through the generosity of many friends and supporters, we purchased 160 acres of land in the Green Mountains of Vermont, naming our place, Green Mountain Monastery and the Thomas Berry Sanctuary.

I have been a presenter and retreat leader for over thirty years at many gatherings  including:  Leadership Conference of Women Religious  (LCWR), Catholic Religious of Australia (CRA),  Spiritual Directors International (SDI), International Gatherings of Congregational Chapters of men and women, as well as to seminaries, formation houses, ecological centers  and universities throughout India, Africa, Asia, Australia, New Zealand, Europe and Latin America.

My time is divided between life at the monastery and teaching and leading retreats and programs around the world on themes related to deepening our relationship with the entire sacred community of life and understanding our role in the universe story.